A Closer Look at Inexpensive Suits From Massimo Dutti

by John Bramaan on February 9, 2018 in Product Reviews

Massimo Dutti suits are becoming more common in the used luxury clothing market. But what’s their quality of construction like? Is the cloth any good? How do they fit? And just who is “Signor Dutti” anyway? Read our review for answers to these and many other pressing sartorial questions.

A Brief Review of the Massimo Dutti Brand

In 1988 comic crime caper A Fish Called Wanda, Kevin Kline turns Jamie Lee Curtis into a raging nymphomaniac merely by reeling off a list of cheeses and other delicacies in a psuedo-Italian accent (“Mozzarella, Parmigiana, Gorgonzola…”).

Although Massimo Dutti is not quite on that level, the fact that this entirely Spanish brand chose to go into business with an Italian-sounding moniker – despite there being nobody with the name Massimo anywhere in sight – was no doubt a decision based on this same association of all things Italian with sexual allure and elegant clothing design. Indeed, when Dutti launched in the mid-1980s, this was the peak of Giorgio Armani’s fame and dominance of the global fashion industry. So for a label pitching towards that very same sector of the menswear market, opting for a classy Italianesque brand-name probably seemed like a pretty rational thing to do.

Consider, for example, Adolfo Dominguez, another Spanish label that started life in the 1980s: despite offering genuinely high-end products and having a strong presence internationally, this is not a brand that is often mentioned in the same breath as, say, Armani, Prada, or Gucci etc.

True, nor is Massimo Dutti. At least not within fashion circles. But with its clever marketing and tactical real estate maneuvers, the unsuspecting customer can be forgiven for assuming that they are indeed buying from one of the big Italian menswear houses.

Enter a Massimo Dutti store and the vibe is very much one of understated luxury: subdued lighting, plush carpet or marble flooring, dark-stained wooden cabinets. Staff are elegantly dressed and attentive, and there’s certainly none of the free-for all chaos of discarded clothing, items half off their hangers, or moody, indifferent staff – as can often be found in stores such as Zara or their younger, cheaper, cousin Pull and Bear.

And yet, if you’ve ever travelled outside of the US – particularly to Europe or elsewhere in the Americas – you may have noticed that wherever there’s a branch of Massimo Dutti, there’ll invariably also be a Zara or Pull and Bear within a 100 feet radius. This is because Massimo Dutti is in fact majority-owned by Inditex: the world’s largest clothing manufacturing group. And in order to achieve total saturation of key retail locations, Inditex tends to strategically cluster together all the different brands in its portfolio, such as Zara, Pull and Bear, Oysho, Bershka, Stradivarius and others.

In short, Despite the marketing, Massimo Dutti is about as far from a classic Italian family-owned luxury brand as you could possibly get. This is mass-produced, high-turnover, high-street clothing. Not Loro Piana.

However, perhaps due to the fact that, beyond Zara, other Inditex brands have yet to make much headway in North America, Massimo Dutti has been able to launch itself here with a slightly more upmarket image than it currently enjoys in Europe.

With that said, when it comes to design and manufacturing, Massimo Dutti is clearly in a different league from its better known mass-market siblings. A Massimo Dutti suit will likely cost you twice the price of one from Zara, but this is reflected in more than just marketing budget or interior design choices. Indeed, Dutti’s construction and materials are undoubtedly superior. 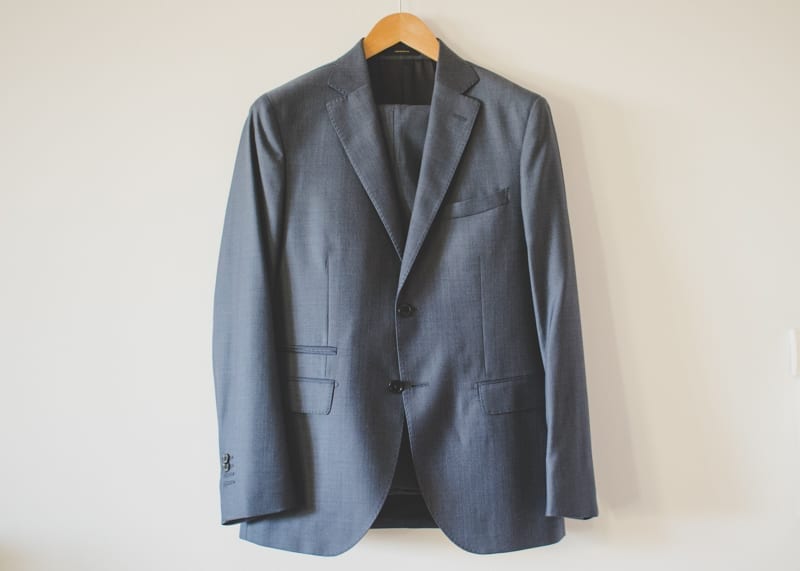 Never having owned – or indeed even tried on – a Zara suit, I couldn’t comment on any differences in cut and fit. But my few experiences with Zara clothing were so disappointing (badly made, odd-shaped, ill-fitting trash with a very short-life span) that some time ago I vowed never to buy anything from them ever again. I wouldn’t say the same for Massimo Dutti. At least not yet.

I say “not yet” because, despite having owned this suit for a couple of years now, it actually hasn’t received anywhere near as much attention as other suits I bought more recently for considerably less money (such as some rather nice $10 thrift-store scores). In part this is because it’s just another mid-blue suit alongside several others in my closet. But also because it’s actually a pretty nice suit, and I’d prefer to keep it that way: not being a moth-eaten flea-market find, I tend to keep it for more special occasions.

Sure, it doesn’t give off quite the same air of sharp sartorial opulence as some of my actual Italian suits do. Yet in fact it hangs very nicely. And with it’s (genuinely) Italian Super 120s wool, it also feels great to wear. If I were really fussy, a quick change of the cheap-looking plastic buttons for some mother of pearl ones would likely add a couple of hundred dollars or so to the overall impression of the suit.

In order to get a really good fit, I usually take my suits to be adjusted by a tailor. I’m skinny, and so suit jackets can often benefit from being clipped in a little at the waist. But in this case the jacket stayed at home on its hanger while I merely had the pants tapered slightly from the knee down. Again, if I were really picky, I might shave a fraction of an inch off the shoulders, but all in all this particular Massimo Dutti blazer looks pretty good right off the shelf. It might not be the most flattering of fits for those of a more “insulated” build however, so try before you buy.

Once upon a time details like fully-opening buttons on the cuffs were a helpful sign that you were likely looking at a bit of well-made tailoring. However, the proliferation of style-blogs pointing out precisely this – and many other far more esoteric sartorial signs – means that even manufacturers of wear-once-and-chuck-it trash such as H&M apparently go out of their way to add real button holes to their jackets now. But yes, for what it’s worth, the buttons on my Massimo Dutti suit’s cuffs do indeed open.

Now, admittedly, as far as EU-based manufacturing is concerned, Portugal is generally considered to rank towards the lower echelons when it comes to quality of workmanship (while it’s perhaps not quite down there with with Romania or Albania, Portugal is certainly not in competition with Italy or the UK for example).

Still, I don’t know about you, but when spending this kind of money on an item of clothing, it’s nice to imagine that whoever made it is not required to regulate their bowel movements to fit around non-stop eighteen-hour shifts.

Is it worth buying a Massimo Dutti suit, then?

To this question I would unhesitatingly answer yes. However with the proviso that this will depend on what you pay for it. I bought mine heavily discounted on sale, and consequently I’m more than happy with my purchase: I feel like I received a product that is worth the money I spent.

Had the only option been to pay full price however, at that point I would likely have begun looking elsewhere. All other things being equal, if a suit from a genuinely Italian brand – one that was also made in Italy – can be purchased for a similar price, then I’d put my money there, rather than go for the mass-market faux-Italian offered by Dutti.

In short, by all means pick up a Massimo Dutti suit if the price is right (i.e. lightly used, or during sales periods), but don’t go out of your way looking for them at full retail cost.