Men’s Tailors in Hoi An, Vietnam

During a recent trip to Vietnam, I got a chance to visit the city of Hoi An, a place where you can buy custom, tailor-made clothing for a very modest price. At the time of my trip, made-to-measure shirts could be had for less than $20 USD, while suits were in the range of $50-100 USD.

Tourists pour in and out of Hoi An every day. Many of them, I suspect, are getting their first experience with custom tailored clothing. Made to measure clothes are offered on almost every street corner in Hoi An.

They’re willing to make you a 3-piece suit, but that doesn’t mean you should hand over your Vietnamese dong for it, no matter how affordable it is.

The quality is often below average, despite any claims they make about copying the latest designer fashions. Walk into a shop and they’ll show you a catalog of designs from major labels. You can simply point at a runway picture or lookbook photo and they’ll make you a similar item. 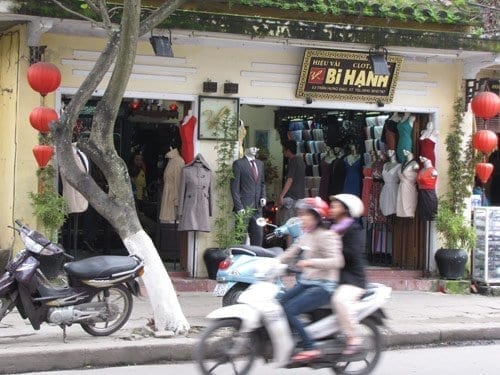 After browsing several shops, I decided not to buy anything serious. But just for fun, I had a few casual shirts made by a few different tailors. They would be button-down shirts in fun patterns.

I knew all the details I wanted, which made the process incredibly quick and easy. To test out different stores with different fabrics, I browsed a 3 different shops and then ordered a single shirt from each one.

The following is a review of three Hoi An tailors that I chose. 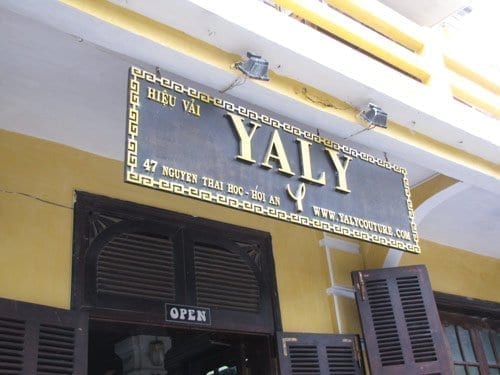 There’s a lot happening at Yaly. They had many sales associates consulting with new customers or fitting new garments.

Fabric choices at Yaly were more expensive, ranging from $30 to more than $100 USD. The associates were friendly, knowledgeable and more thorough than any others I visited.

With their tall, open showroom (the location on Tran Phu), it was a fun place to browse, and there were many different fabrics to choose from.

After choosing a fabric for $45, I rattled off the details of the shirt, got measured, photographed, and told to come back in 24 hours. There was no discussion about the shirt’s stitching, placket, or buttons. They also skipped details like wrist measurement.

What I got was a nice-fitting casual shirt. As requested, I got slim arms with high armholes. The arm length is good, with a little extra to compensate for shrink.

Without darts, I still have a very slim midsection with no billowing. The fabric’s hand (how it feels to the touch) is almost intolerably poor. I asked for a breast pocket but never got one. 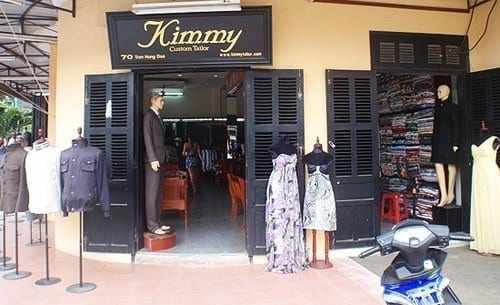 “The best tailor in Hoi An,” according to the hotel staff, was Kimmy. You really can’t miss it if you walk down Tran Hung Dao St.

Kimmy is a friendly place, and they depend heavily on their photo books.

Sit down in their shop and they’ll give you a laptop that contains a seemingly endless PDF document with pictures of designer clothing. I didn’t need it, but I humored them for a few minutes and browsed the photos.

For some of their customers, the catalog photos are probably misleading. It wasn’t clear if the photos were intended to inspire me or sell me a counterfeit. (Counterfeit designer apparel is ubiquitous in Vietnam.) Why wouldn’t they just show me photos of their previous work? Anyway….

Fabric choices were just basics at Kimmy, but I found a nice enough navy blue gingham check. Like all of the other shirt fabrics, the hand was poor and gritty.

The fit and construction turned out decent. Kimmy was the only shop that used darts, which I didn’t request. Their shirt was made with a slightly different shoulder yoke pattern.

This shop was a totally random choice. It had no flashy decoration, a small showroom and no sales staff. I just walked in and talked to the very friendly tailor.

After browsing her fabrics, I chose a navy plaid fabric and told her to make a long sleeve, button down collar shirt with long tails and no placket. I said I wanted it slim, with no darts. 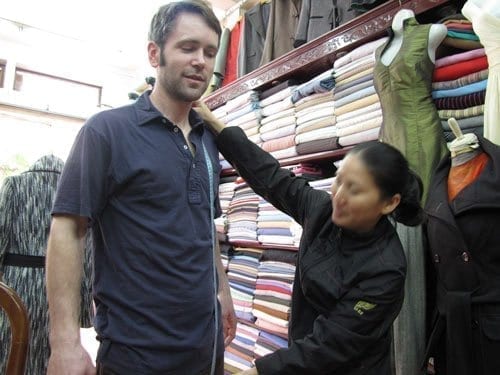 This shirt I received is versatile, lightweight and fits nicely. There’s not much else to say about it. Check out the photos. 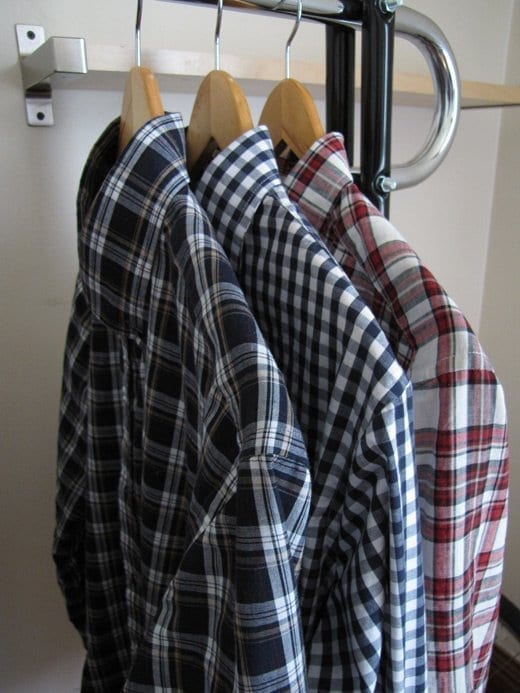 Overall, the similarity of all these shirts is surprising. I wouldn’t argue that one of the 3 shops I chose was radically superior to another. This may be due to coincidence, similar practices, or outsourcing to the same maker in town.

Compared to other made-to-measure shirts in my closet, the fit is decent. The fabric, however, is poor and the construction is questionable at best. I would give them all a 5 or 6 rating. After wearing them a few months, the navy shirt, in front, turned out to be my favorite.

Origins of Tailoring in Hoi An

As the Lonely Planet guide states: “Tailoring in Hoi An is out of control.” Indeed, when you walk through the city, you can’t help but wonder why there are so many tailors. 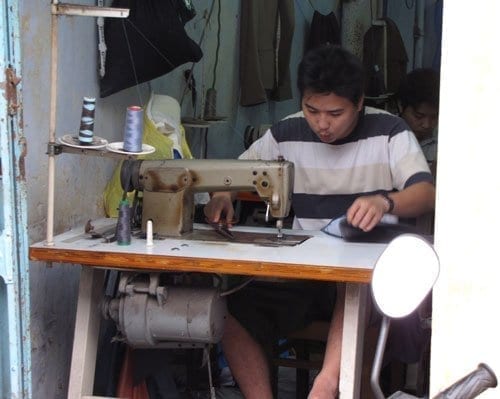 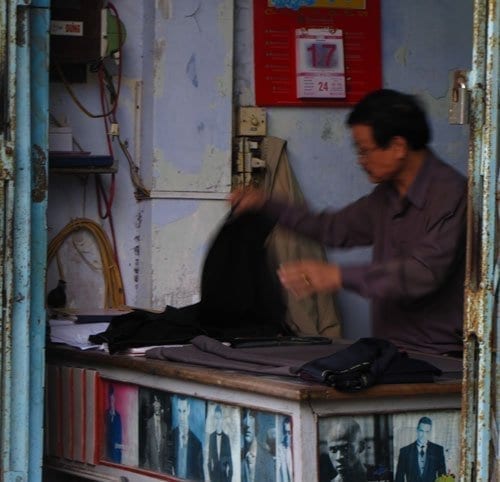 So how did this situation arise? Why are there so many tailoring shops? I couldn’t get a satisfying answer from any of the staff at the culture museum. But here’s some text I found at their exhibit:

Tailoring is a traditional craft which formed rather early in Hoi An. Initially, they [would sew] mandarin’s clothes, dress uniforms and civilian clothes by hand for different tailoring tastes of different peoples” Champa people, Vietnamese, Japanese, Chinese, Westerners living and doing business in Ho An ancient town.

By the end of the 19th century and the beginning of the 20th century, tailoring in Hoi An continued to develop with many classical sewing machines and many famous tailors that specialized in both national and European costumes.

Recently, in the trend of opening and integration, tailoring in Hoi An prospers, with ready and quick-made services that please all kinds of customers. 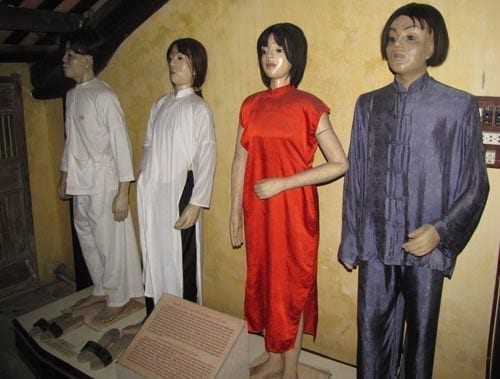 So historically, it seems that Hoi An is a sort of monotown, where the people overwhelmingly support a particular craft.

If you enjoy clothing and get the chance to visit Vietnam, I highly recommend a stop in Hoi An.